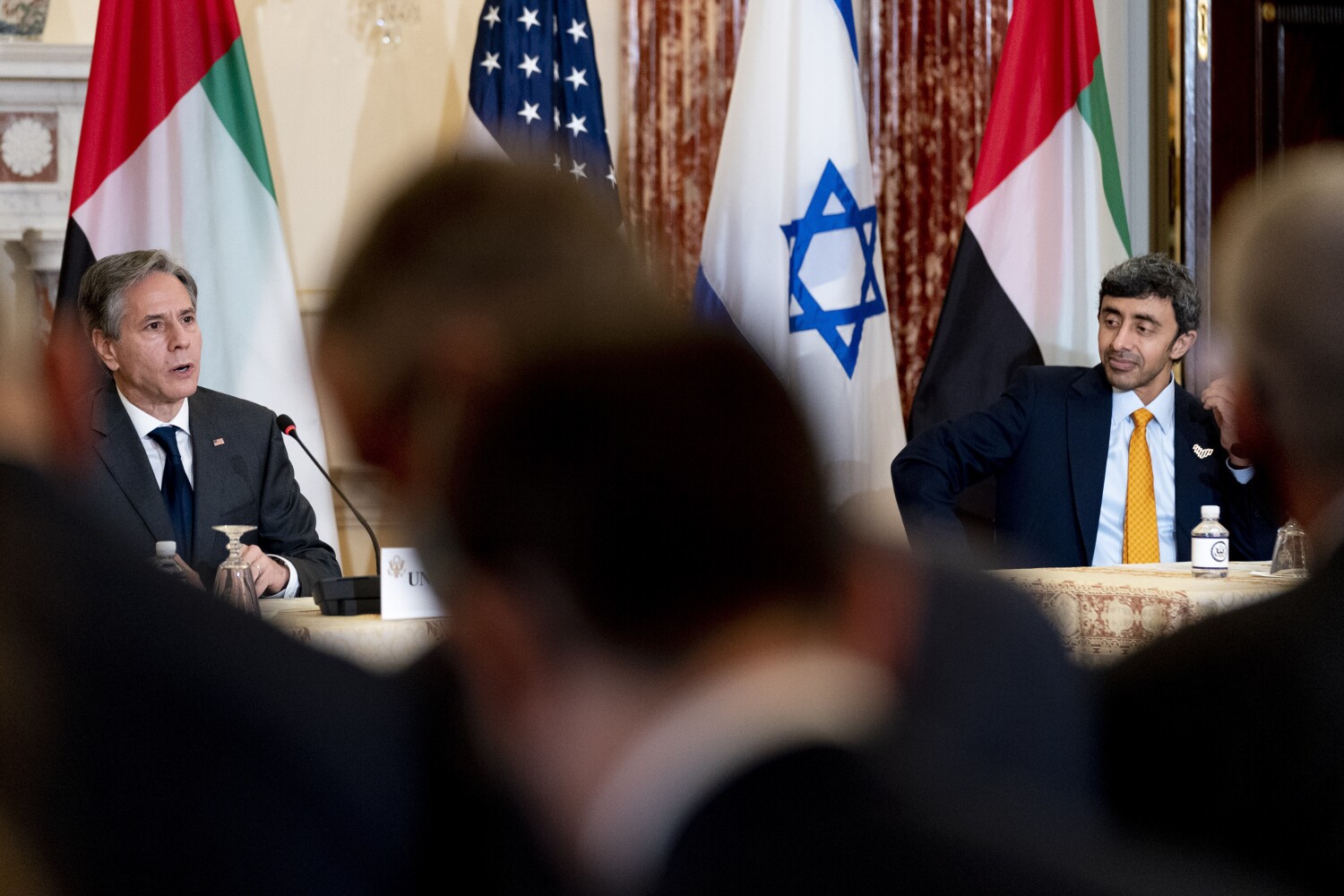 The Biden administration is attempting to build on historic agreements that normalize relations between Israel and a handful of Arab or Muslim countries, but without excluding the Palestinians, whose cause of statehood seems more distant than ever.

“We strongly believe that Palestinians and Israelis deserve to live safely, securely with equal measures of freedom, prosperity and democracy, and we will continue our efforts in that direction,” Blinken said. promotes the creation of a Palestinian state, Blinken said. A news conference with Lapid and bin Zayed.

The three leaders also discussed Iran’s failure to return to the international nuclear deal, which the Trump administration withdrew as other countries in the treaty tried to keep it alive. Blinken said the “runway” to reviving the deal governing the enrichment of Iran’s nuclear material is “getting shorter and shorter.”

Lapid reiterated that if diplomacy with Iran fails, Israel is ready with options. Israel is believed to have carried out covert attacks on Iranian targets.

The agreement between Israel and a handful of Arab countries, known as the Abraham Accords, was heralded a year ago by the former president as his biggest diplomatic achievement during the Trump administration. In addition to the UAE, Bahrain signed the agreement, followed by Sudan and Morocco, although their participation has been more limited.

Blinken lauded the “transformative partnership” that is allowing the three countries to build and deepen diplomacy and development projects in areas such as water use, climate change and trade.

Officials in current and former administrations say other Arab and Muslim countries are ready to join, but to date there has been no such movement, especially from regional powers such as Saudi Arabia.

Although none of the signatories to the Abrahamic Pact were involved in a war with Israel, they did not recognize the country. Giving diplomatic recognition to Israel was a big step for him.

But there were Palestinians left out in the cold.

Arab countries had long argued that they would not develop relations with Israel as long as the question of Palestinian sovereignty remained unresolved. The Arab signatories of the Abrahamic Agreement insisted that by joining they were able to thwart Israel’s plans to annex large parts of the West Bank, which the Palestinians claimed for a future state.

Still, there has been no progress by the US or regional powers on talks with the Palestinians. Washington has not reopened the US consulate in Jerusalem, a de facto embassy for Palestinians, despite promises to do so. The consulate, which became the US embassy in Jerusalem, was moved there by Trump in 2018 for criticism from international allies and Palestinians, but praise from Israel. And the Biden administration hasn’t pushed back on the expansion of settlements by force.

A senior State Department official said the Abrahamic agreements “are not a substitute for a two-state solution,” and we hope that normalization can be leveraged to push progress on the Israel-Palestine track.

The official briefed reporters ahead of Wednesday’s meetings on the condition of anonymity as per government protocol.

“The Biden administration began with a clear commitment to a two-state solution,” the official said. “We continue with that commitment and we want to pursue it as much as we can, when we can.”

It is not clear what leverage the Biden administration can leverage on Israel, which is still the biggest recipient of US aid.

Lapid has been more receptive to Palestinian rights, but Israel’s new prime minister, Naftali Bennett, has stated that he opposes an independent Palestinian state.

“Our goal is to work with the Palestinian Authority to ensure that every child has the opportunity to have a “good way of life,” Lapid said in a news conference with Blinken.

Bin Zayed said he hoped Palestinians and Israelis would see that regional cooperation is the “way”, as it brings stability, peace and economic prosperity.

Some experts in the Middle East have suggested that the Biden administration is lukewarm on the Abraham Accords. It is not clear why, he says, noting this could be because it was a Trump achievement or because current officials see only limited progress under it.

“The Biden administration is engaging in rhetoric,” said Michael Koplo, policy director of the Israel Policy Forum, a pro-Israel American group that also supports a Palestinian state. “But there is no evidence that they are complicit in finding out what should happen if other countries are involved or to bring in the Palestinians.”

Biden and Blinken have had to tread a narrow line, where they continue to prove that the US and Israel share an “unbreakable bond” while eliminating or correcting some of the previous administration’s pro-Israel policies.

Some members of that administration – Trump son-in-law and daughter, Jared Kushner and Ivanka Trump, and former Secretary of State Michael R. Pompeo – Abraham was visiting parts of Israel this week to celebrate the first anniversary of the accord.

Pompeo reportedly visited Jewish settlements in the West Bank, considered illegal by much of the world, with disgraced former prime minister Benjamin Netanyahu, who recently reunited after facing trial on corruption charges. were lost.

Pompeo also received something called a Peace Through Strength Award from staunch Trump ally David Friedman, who served as a previous administration’s ambassador to Israel and is a champion of the Jewish settler movement.